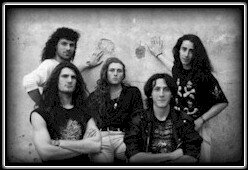 The original line-up gets together in 1991, as it happens to all the successfull bands, with the intent of playing heavy metal, having fun, and with nothing but the hope of a successfull carrer.

A few years later, in 1994, with more experience in songwriting, the band manages to release "Midnight Resistance", the first demo, now a cult-item among the fans, that gets enthusiastic reviews on major metal magazines in Italy and Germany and that gives them the chance to sign with Underground Symphony, a new-born indie.
It is the year of "Piece of Time", their first EP, that marks the direction the band is taking: pure melodic speed metal with a keyboards-background that fascinates the Italian and German underground metal scene. It is the first step for the release of a full-lenght LP.

In early 1995, then, "No Limits" is released and the interest on the band gets higher and higher among metal kids and independent labels. The popularity of the band increases not only in the mother land and the rest of Europe, but also overseas (Japan, Korea, Brasil), where some labels (Teichika for Japan) offer to deal the record out. The band stays in the metal magazine "Burrn!" top ten charts for almost six months, but, despite the good sales, a tour is not ready to come yet.

Everything seems to go on the right way for success, but this is not enough to avoid tensions inside the band to rise and Joe Terry, the lead singer, leaves the band to re-join Athena first and become, later on, the frontman of Rhapsody. 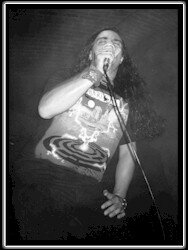 1997 is a very important year for the line up-adjustments the band undergoes: the former drummer/producer and keyboards player finally leave the band and the new vocalist Rob Tyrant (Roberto Tiranti) joins the boys bringing a lash of energy. In the meantime some of the most important big metal labels show a deep interest on the band's new demo and finally Metal Blade makes the best offer and the contract is signed! It takes six months to record the second album "Return To Heaven Denied" and before its release the band takes part to summer 1998's metal main event: "Gods of Metal", together with some of Heavy Metal biggest acts such as Blak Sabbath, Pantera, Helloween, Blind Guardian, Stratovarius. Return To Heaven Denied is a success among fans and metal magazines and it gives a strong impulse not only to the carrer of the band, but also to the whole Italian metal scene, that recognizes Labyrinth as the new sensation of the moment.
Shortly after the release of the new record the singer Rob Tyrant leaves the band, being replaced by the lead singer of Domine and ex leader of the late 80's cult metal band Sabotage: Morby. Morby leads Labyrinth throughout the whole European tour, in Europe as supporting act of the more popoular bands Hammerfall and Primal Fear, in Italy, few mounths after, as a leading act supported by Heimdall.

After a short break the group enters the recording studio to release the new Mini CD "Timeless Crime", containing new hits and old tracks from the first demotape "Midnight Resistance" to LPs "No Limits" and "Return to Heaven Denied".

In the meanwhile Rob Tyrant gets back to the band, replacing Morby and singing with Labyrinth in the most important European Heavy Metal festivals (Gods of Metal, Dynamo and more).

After this "summer of festivals" the band enters the recording studio again to release the new full-length LP "Sons Of Thunder". Unfurtunately for the fans, the recording of the album takes a little longer than usual because at some problems with the mixing (the record has to be remixed because the first "sound" did not satisfy the band). But in the meanwhile our guys take part (as presentation for the new album) to other very important European festivals of kind of Wacken 2000 and Rock Machina 2000 (Spain), having indescribable success.

As soon a released, at the end of  August 2000, Sons Of Thunder sparkles, flying at number 52 of the Japanese chart and at the 26 of the Italians one. Such good results are recompensed with the request of make a tour in South America with Vision Divine (for the dates see the section "tour"). The local chicos give to the two Italian bands continuous sold outs and a return to Latin America is in sight in 2002 for both the bands.

With a such response the band organizes an Italian tour first, in February 2001 with support band Sigma (ex Love Machine), and then a long European tour, supporting Helloween first and then Iron Savior (dates in section "tour").

As an Italian saw says, there's no rose without a thorn. And unfortunately the thorn is the Italian Labyrinth's label: not having had a correct attitude in the years, the band is forced to bring an action against it. All is resolved and after many legal problems, Labyrinth are again free from any tie that bound them to their label. Pointing to the self-production, they have on the stocks not one but two album - a live and a studio album - expected for the summer (the live) and for September 2002 (the studio album).
For the recording of the live is expected a mini Italian tour with 3 dates (at the end of February) in the north Italy, with other important Italian bands as Domine, Necrodeath, Skylark and Centurion. Some new tracks are already ready and even if they are different from Sons Of Thunder, they will maintain the unmistakable Labyrinth trademark.

An incomparable success at the Italian Attack. The band had again the confirm of the fans love, both of the old ones and of the new ones, met during this 3 days festival. The bands which took part made great a manifestation waited by several Italian Metal kids. The moment passed with White Skull, Skylark, Domine, Novembre and Centurion will remain forever in the memory of Labyrinth.

From this concerts will be taken out the songs which will compose the firstlive album of the band. In April 2002 began the writing of the material for the new album, that will be released in the first months of 2003. Four tracks compose a demo very rich that in its power and melody recalls the first two Labyrinth's album, "No Limits" and "Return To Heaven Denied". When everything seemed to go smoothly between the boys of the band, a real wet blanket freezed the fans everywhere in the world: Olaf Thorsen leaves the band. The reasons are just musical differences between the guitarist and the band and not quarrels like someone suddenly supposed. The relationship between the two parts are still good and Olaf just decided his musical career: dedicate himself exclusively to Vision Divine....and the story continues.