So Rob, three months after the last interview to Anders have passed and I asked him about names for a new deal for the band: anything new? 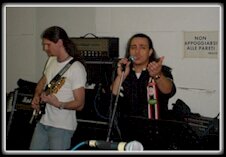 "We are again involved for the distribution: the live album will be surely release, we have some proposals to analize carefully, because after the live there is also the next studio album. We have to find the label that will make us the best proposal and that will let us record a good studio album. For the outline we think to put in many classics, with also old tracks for example "No Limits" and "Dreamland", perhaps also "Mortal Sin"!"

Anything new then? The only one certitude is then this live that will close finally with your old label Pick Up?

"As said, we are analizing some proposals, but I can't speak with certitude yet, also against bad luck... they are surely very very tempting, I don't know if you understand me! If Pick Up won't like the live we will break off sooner relations. They can listen to the album and if they don't like it we are free to propose it to someone other. If they will accept it, then this will be our last album released for them."

Again about the otline of the shows: do you think to something in particular?

"It's surely a surprise, but I was thinking about something like the last Queensryche album, where they divided the tracks into periods, from the first EP to Rage For Order and so on until the last. We could do like that: from our first album until Sons Of Thunder. We will talk about together, but I think this is a nice idea!"

The band for the Italian Attack Festival: how did you choose?

"As far as I'm concerned, sincerely, in this itinerant festival will play our friends: people with whom I had to do and with whom I feel good. And then guys, there is Morby: a great friend!!"

Let's talk about you as artist: many people know that you sing also in New Trolls, an historical pop Italian band, but not anyone knows your old band Vanexa. It is rumoured about a reunion: a third pole in Rob Tyrant's life?

…and in the take-off of the band… "Come on, guys, a bit of seriousness! It's for the web site!! What stupids… I was saying, with Vanexa I have just sing again old material. It was funny, but it is over, maybe papers will talk about it, maybe not: I don't think Vanexa will play again, also because the guitarist has had healthy problems , the other ones are getting on (he laughs…). It's just to renew the music of the band. We will see what will happen! About New trolls, we will see, too! When Labyrinth will have tournée I will leave with them and New Trolls will do without me, as when Labyrinth were in tour in South America or in Europe with Helloween and Iron Savior." 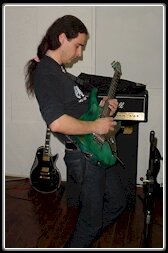 "Absolutely. And if the pledges with Labyrinth would be too urgent, I will leave New Trolls!! It is necessary that a person in the entourage of the band will inform me in time the dates of the concerts, exactly as happens in the other band."

After the troubles with Pick Up, have you find a person of absolute trust as manager?

"We surely want a manager, but not a member of the band! I think that a band must just play and don't have to care about things don't due to it, for example contact with the promoters: a musician who plays in a band could do it, but it would not be good, it would be a deception. We are thinking about a person, but I can't say his name… We will see if he will accept the charge."

Again 15 days and the band will come again to demonstrate its power that will be immortalized in this live, whose temporary name is "Livin' In A Maze".

At the end of the rehearse, Olaf let the rest of the band listen to the QBASE traces of six new songs, written in the last weeks with Anders and Cri. The sound is really coarse, but the Labyrinth touch is unmistakable for the melody and the speed: a sound exactly between "No Limits", "Return…" and "Sons…" realizing a really Labyrinthic and powerful sound !!! In the next days the proposals of some record companies will be discuss and then there will be the decision of Labyrinth.